I thought I'd do a post about my current tattoos =]

I have four tattoos at the moment, and plans for many, many more! It's true when they say you get addicted!

I got my first one when I was 19. It was a tribute tattoo, which has now become a memorial tattoo. I found out that my cat, who I had since I was six years old had Lymphoma, a cancer of the lymph nodes. She was thirteen years old, me and brother picked two out of a litter of kittens, he called his Salem, I called mine Magic (we were big Sabrina the Teenage Witch fans!) She was the loveliest cat, she would actually wrap her little arms around your neck in a hug and nuzzle your neck. I was obviously upset when I found out she had cancer. I got a tattoo of her name on my foot as a tribute to her, I wanted while she was still around, I think it gives it much more meaning.

She could have been treated with weekly visits to the vet for treatment and injections. But she hated the vets and got so stresses every time we took her we decided just to let her live the rest of her days happy and content. It was even harder when I had to start uni, I had no idea how she was, I couldn't see her everyday. I phoned my mum non stop to ask how she was.

She seemed fine up until November time, when her health rapidly deteriorated. She refused to eat anything except the cream and custard from the top of a Tesco value trifle of all things! She lived off this for another month or so, but she was getting so thin and weak. She lived in a laundry basket on out kitchen work top and couldn't even jump out. She stopped cleaning herself, we had to drip water into her mouth to make sure she was hydrated. In the end, we decided to call the vet out to ask if she was in any pain. He said she wasn't, but the lymph nodes in her neck were so swollen and tumorous that she would soon suffocate, so we decided it was time to let her sleep. This was about three days before Christmas, not the happiest of times!

Ahh I'm tearing up as I write this! Sorry for the massive downer guys! 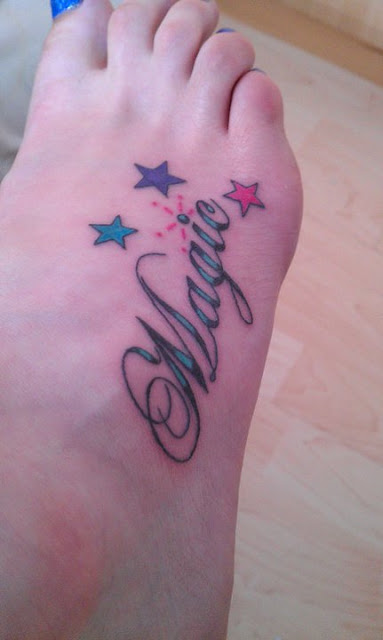 It was fairly painful. As it was my first one I didn't have anything to compare it to. The closest description I can muster is a cat scratch (ironically) There were points on the lower part of the 'g' and the pink star which made me wince, but the rest of the time I just gritted my teeth and sat through it. This took about an hour in total. I love it so much. It means so much to me.

After that tattoo I knew I had the bug. I wanted another one!

I got this one about 4 months after my first one. Our 'family' song is Let It Be by the Beatles, its the only song every person in my family knows how to play on some kind of instrument. Its one of my dads favorite songs and I grew up listening to it. 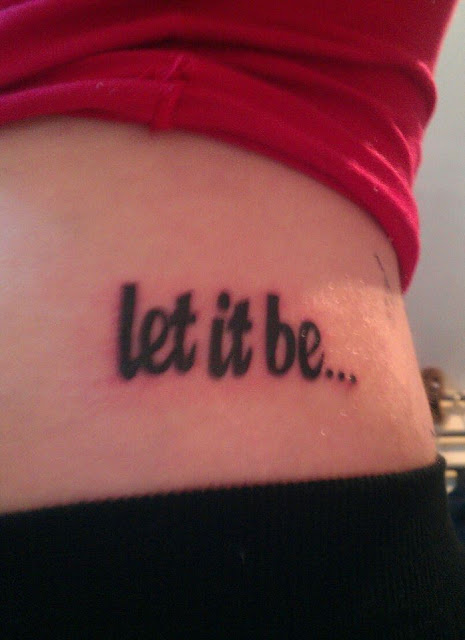 Sorry about the blurry pic, and its still red from having just had it done. It's on my left side/hip, I often forget I have it as I don't see the part of my body regularly! This didn't hurt as much as my foot, but still had some jaw clenching moments! This one also took about an hour to do.

I recently just had my latest tattoos finish. They're a pair so I'm never sure if I should count them as one or two! I love the book Peter Pan by J.M Barrie. Its so magical and mystical. I like the Disney film too, but it doesn't have a patch on the original book!

One of my favorite parts of the book is when Wendy  tells Peter she wants to give him a kiss and he holds out his hand to receive it, obviously thinking it was an object. She panics and gives him a thimble. He tells her he will giver her one in return, so she puckers up with her eyes closed waiting and peter holds and acorn out in front of her. Realizing, she threads the acorn on a chain and wears it round her neck and it later saves her life.

I really love this part, I read it over and over. I cant explain why, but I just do!

I got these tattoos inspired by it. My biggest ones yet! (Excuse the gooseybumps, it was chilly!) 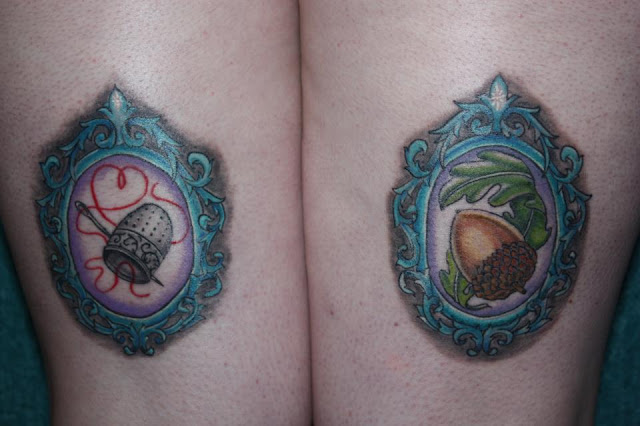 They're on the backs of my legs, just above my knees. I love them so much! Can you believe the guy who did them is only an apprentice! these took about 6 hours in total over two sessions. The first was about 3hrs45mins. I was dying by the end of it! I forgot to have breakfast that day (stupid I know) and I was so drained by the end of it! The next session took about two hours and was much easier to handle!

I always use Bepanthen on my tattoos during the healing stage, I squeeze some onto my hand, rub my hands together until its warmed up and feels greasy, then carefully smooth it over the tattoo. I do this after rinsing with Sanex 0% body wash and drying by gently dabbing with a paper towel.

After they've stopped hurting and any scabbing has healed I use Palmer's Cocoa Butter Formula on them. I rub a thin layer on all my tattoos twice a day to keep them moisturised, bright and healthy!


I have big plans for a piece on my ribs/back but thats still being perfected in my head!


Thanks for reading this mammoth post! Congrats if you read all of it!

Feel free to ask me any questions about tattoos or if there are any posts you wanna see me do?

Amy Louise
I'm a twenty year old from a small village near Bristol. I currently live in Nottingham and am a student at Nottingham Trent University studying Costume Design and Making.